Lenny Face Emoticon Unicode symbols is generated. The face of the Japanese word “desu” similar to spam the forums and image boards are used. On 4chan, which is “Le Lenny Face” or come to “Le Face Face.”

All you need to do is just click on the face to copy and paste it wherever you want: share on forum, facebook, twitter, reddit… or whatever website you want to annoy people.
Also, you can create your own lenny face, by combining wildcard characters for mouth, eyes and ears, you can create a lot of different faces. 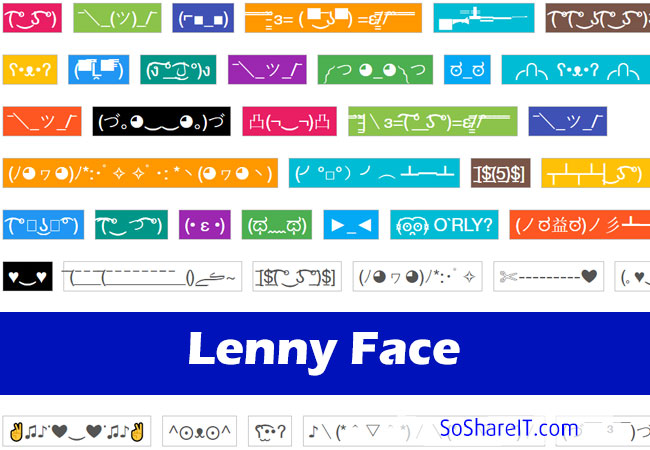 Please save this page in your bookmark so you don’t lose it, because looking for text face on google is very difficult, save it and whenever you need to copy a face, just go to this site and click to copy and use immediately.

a face usually to annoy people
guy making an argument with some guy on the internet which does not do anything:’this sucks’
guy also making the argument with the guy above: ‘lenny face ( ͡° ͜ʖ ͡°) ‘

If you want to get your hands on a image version of lenny face you can download a PNG image version from Wikipedia or view Simple Tutorial at How to Make a Lenny Face using unicode.

Users from Japan popularized a style of emoticons (顔文字, kaomoji) that can be understood without tilting one’s head to the left. This style arose on ASCII NET of Japan in 1986. Similar looking emoticons were used by Byte Information Exchange (BIX) around the same time.[20] These emoticons are usually found in a format similar to (*_*).

The asterisks indicate the eyes; the central character, commonly an underscore, the mouth; and the parentheses, the outline of the face. Different emotions such as (“)(-_-)(“), are expressed by changing the character representing the eyes: for example, “T” can be used to express crying or sadness (T_T). T_T may also be used to mean ‘unimpressed’.

The emphasis on the eyes is reflected in the common usage of emoticons that use only the eyes, e.g. ^^. Looks of stress are represented by the likes of (x_x) while (-_-;) is a generic emoticon for nervousness, the semicolon representing sweat that symbolizes anxiety. Repeating the /// mark can indicate embarrassment by symbolizing blushing.

Characters like hyphens or periods can replace the underscore; the period is often used for a smaller, “cuter” mouth or to represent a nose, e.g. (^.^). Alternatively, the mouth/nose can be left out entirely, e.g. (^^).

Parentheses also can often be replaced with braces, e.g. {^_^}. Many times, the parentheses are left out completely, e.g. ^^, >.< , o_O, O.O, e_e and/or e.e. A quotation mark “, apostrophe ‘, or semicolon ; can be added to the emoticon to imply apprehension or embarrassment, in the same way that a sweat drop is used in popular and common Asian animation. Microsoft IME 2000 (Japanese) or later supports the use of both forms of emoticons by enabling Microsoft IME Spoken Language/Emotion Dictionary.

In IME 2007, it was moved to Emoticons dictionary. Further variations of emoticons may be produced by using combining characters, e.g. ٩(͡๏̯͡๏)۶ and ᶘᵒᴥᵒᶅ. These emoticons can be used also with [ ] instead of ( ), or without the parentheses at all in some of the cases. There is also the \(0O0)\, indicating a hooligan or crazed behaviour, and the (ﾉ◕ヮ◕)ﾉ*:･ﾟ✧.

How many combinations are possible?

Western use of Japanese style

English-language anime forums adopted those emoticons that could be used with the standard ASCII characters available on western keyboards. Because of this, they are often called “anime style” emoticons in the English-speaking Internet. They have since seen use in more mainstream venues, including online gaming, instant-messaging, and other non-anime related forums.

The parentheses are sometimes dropped when used in the English language context, and the underscore of the mouth may be extended as an intensifier, (e.g. ^_________^ for very happy) for the emoticon in question.

This emoticon t(-_-t) uses the eastern style, but incorporates a depiction of the western “middle-finger flick-off” (commonly known as ‘the bird’)” using a “t” as the arm, hand, and finger. Also, one of the newer ones, *,..,*, or `;..;´ as such for a “vampire” or other mythical beasts with fangs.

Mixture of Western and Japanese style

The parentheses are similarly dropped in the English language context and the emoticons only use alphanumeric characters and the most commonly used English punctuation marks. Emoticons such as -O-, -3-, -w-, ‘_’, ;_;, T_T, :>, and .V. are used to convey mixed emotions that are more difficult to convey with traditional emoticons.

There are also more faces along those lines like >o<; using the ; as a sweat mark, and the o as a mouth, and the inequality signs as the eyes, it shows stress, or slight confusion. The number of emoticons that can be made is very large, and can express many shades of meaning.

Make sure to check back regularly. More features and characters will be added soon!

More (of the sea or sky) stormy, turbulent, or threatening. “the wild, angry sea” (of a wound or sore) red and inflamed. “the bruise below his eye looked angry and sore” synonyms: inflamed, red, swollen, sore, painful “he had an angry spot on the side of his nose”

More 2. literary be or become pink or pale red. “the trees are loaded with blushing blossoms” noun 1. a reddening of the face as a sign of shyness, embarrassment, or shame. “he had brought a faint blush to her cheeks” synonyms: flush, reddening, high colour, colour, rosiness, pinkness, ruddiness, bloom “a deep blush spread from her head to her neck” 2. a pink or pale red tinge. “the roses were white with a lovely pink blush”

Crying ˈkrʌɪɪŋ/Submit adjective very great. “it would be a crying shame to let some other woman have it”

Glasses ˈɡlɑːsɪz/ noun a pair of lenses set in a frame resting on the nose and ears, used to correct or assist defective eyesight. synonyms: spectacles; More a pair of binoculars.

“it’s encouraging to note that Schwarzenegger wasn’t born with massive guns” verb 1. shoot someone with a gun. “they were gunned down by masked snipers” synonyms: shoot, shoot down, mow down, hit, wound, injure, cut down, bring down; More 2. informal cause (an engine) to race. “as Neil gunned the engine the boat jumped forward”

Hide1 hʌɪd/Submit verb 1. put or keep out of sight. “he hid the money in the house” synonyms: conceal, secrete, put in a hiding place, put out of sight, camouflage; More nounBRITISH 1. a camouflaged shelter used to observe wildlife at close quarters.

Kiss kɪs/Submit verb 1. touch or caress with the lips as a sign of love, sexual desire, or greeting. “he kissed her on the lips” synonyms: plant a kiss on, brush one’s lips against, blow a kiss to, air-kiss; More noun 1. a touch or caress with the lips. “a quick kiss on the cheek” synonyms: air kiss; More 2. BILLIARDSSNOOKER a slight touch of a ball against another ball.

Moustache məˈstɑːʃ/Submit noun noun: mustache a strip of hair left to grow above the upper lip. synonyms: informaltash; More a long moustache. “a clergyman with long grey moustaches” a growth similar to a moustache, or a marking that resembles one, round the mouth of some animals.

Running ˈrʌnɪŋ/Submit noun 1. the action or movement of a runner. “his running tore United to shreds” 2. the action of managing or operating something. “the day-to-day running of the office” synonyms: administration, management, managing, organization, coordination, orchestration, handling, direction, conduct, overseeing, controlling, control, regulation, supervision, charge More adjective 1. denoting something that runs, in particular: 2. done while running. “a running jump”

Shrug ʃrʌɡ/ verb 1. raise (one’s shoulders) slightly and momentarily to express doubt, ignorance, or indifference. “Jimmy looked enquiringly at Pete, who shrugged his shoulders” noun 1. an act or instance of shrugging one’s shoulders. “she lifted her shoulders in a dismissive shrug” 2. a woman’s close-fitting cardigan or jacket, cut short at the front and back so that only the arms and shoulders are covered.

Table ˈteɪb(ə)l/Submit noun 1. a piece of furniture with a flat top and one or more legs, providing a level surface for eating, writing, or working at. “she put the plate on the table” synonyms: bench, board, work surface, worktop, counter, desk, bar, buffet, stand, workbench, worktable, top, horizontal surface, surface “she put the plates on the table” 2. a set of facts or figures systematically displayed, especially in columns. “the population has grown, as shown in table 1” synonyms: list, chart, diagram, figure, graph, plan; More verb 1. BRITISH present formally for discussion or consideration at a meeting. “more than 200 amendments to the bill have already been tabled” synonyms: submit, put forward, bring forward, propose, suggest, move, enter, lodge, file, introduce, air, moot, lay “an opposition MP had tabled a question in parliament” 2. US postpone consideration of. “I’d like the issue to be tabled for the next few months”

Wink wɪŋk/Submit verb 1. close and open one eye quickly, typically to indicate that something is a joke or a secret or as a signal of affection or greeting. “he winked at Nicole as he passed” synonyms: blink, flutter, bat; More 2. (of a bright object or a light) shine or flash intermittently. “the diamond on her finger winked in the moonlight” synonyms: sparkle, twinkle, flash, flicker, glitter, gleam, shimmer, shine; More noun 1. an act of winking. “Barney gave him a knowing wink”